About the ‘device wifi’ alpha

This page explains the ‘device wifi’ alpha that we ran in early 2020.

A few organisations took part. Device wifi is not currently available to organisations and we’re not progressing this at the moment (January 2021). We may do so in the future though.

Device wifi is also referred to as ‘certificate-based authentication’.

What is device wifi?

Currently, end users need to create their GovWifi account themselves by either:

They then get sent credentials to sign in with.

With device wifi, the device connects to the internet using trusted certificates, instead of the person’s username and password.

Some organisations told us they needed devices to connect to the internet through certificates instead of credentials. They were already using workarounds to meet their needs.

To connect multiple managed devices to GovWifi quickly, staff members working in IT teams have used their own GovWifi usernames and passwords. This includes when they needed to:

This means that the IT staff member’s GovWifi account details were associated to hundreds of devices. Any malicious internet activity on those devices would be attributed to them.

Certificate based authentication gives devices automatic access to GovWifi as long as they have a valid certificate issued by Public Key Infrastructure (PKI) trusted by GovWifi service. Organisations become trusted when their Certification Authority (CA) certificates are uploaded to the FreeRADIUS infrastructure. 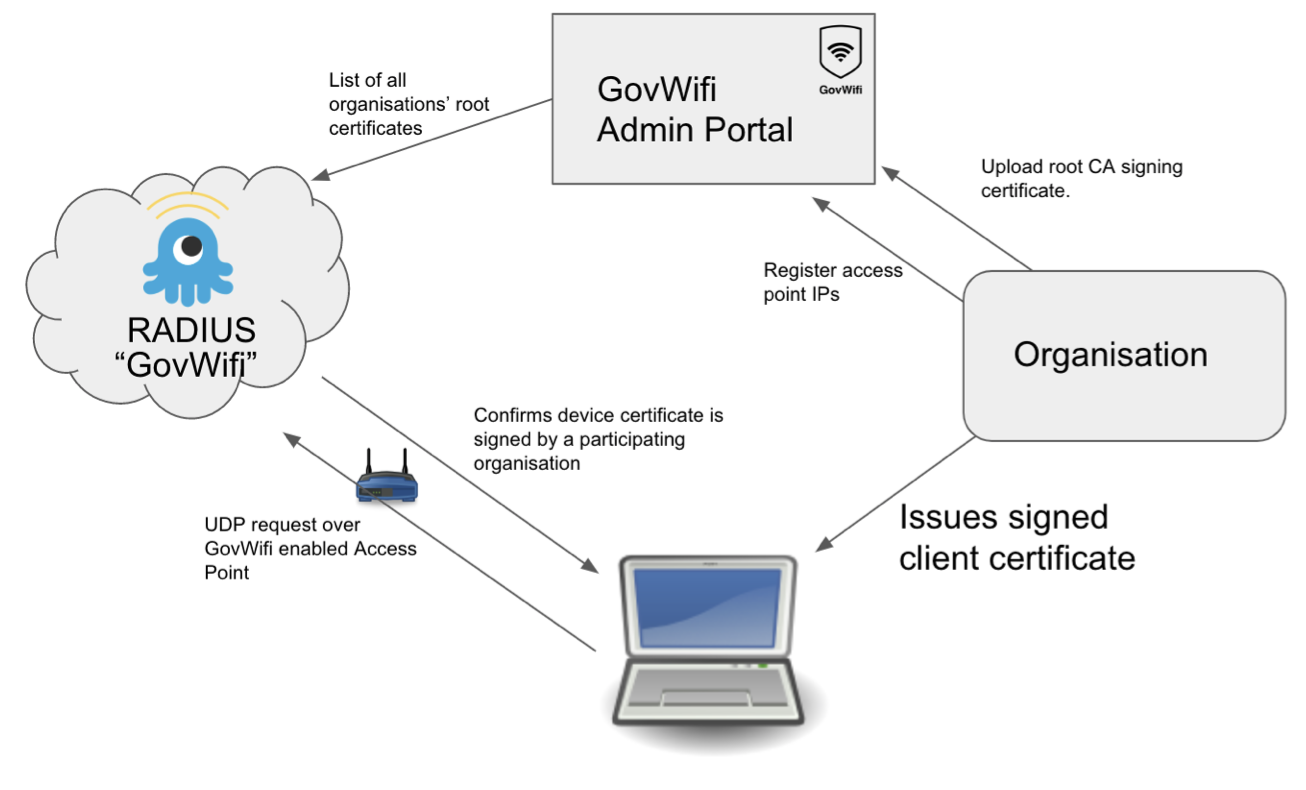 Where to find the code

The code for certificate authentication is in the govwifi-frontend repo.

The EAP-TLS is handled in FreeRADIUS.

How to receive changes to root/intermediate CA certificates from organisations

Receiving changes to certificates would be a common task for developers if we supported device wifi.

Organisations send us their root/intermediate CA certificates. These are kept in govwifi-build, in the encrypted file passwords/certs/production/ca.pem.gpg. If an organisation wants to send us new certificates or delete existing ones, this file would need to be edited to add or remove them.

To edit this file, do this:

Once a change has been made to this file and it has been merged into the main branch, the Concourse pipeline sync-frontend-certs gets triggered, which syncs the certificates to an S3 bucket which is read by the FreeRADIUS servers during initialisation.

This is only synced to staging automatically. Syncing to production must be triggered manually from Concourse, in order for any changes to take effect for production users.

You can read more about device wifi.